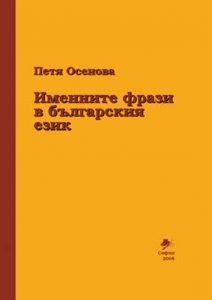 This book concentrates on the analysis of the Bulgarian NPs from an HPSG perspective. It first makes an overview of specialists’ opinions on the NP structure, head-dependent relations within NPs and argument-taking NPs. Then, Pustejovsky’s ideas about the generative lexicon are integrated within the HPSG-based theoretical apparatus. More precisely, the qualia structure and argument structure are introduced. These structures are crucial for analyzing the relational and deverbal nouns in contrast to the others. It is assumed that the noun is the head of the Bulgarian NP. Two language specific principles are formulated – the Definiteness Principle and the Agreement Principle.

A typology of the Bulgarian NPs is also proposed, which classifies them according to the following criteria: quantity (the number of the elements and the degree of their embedding), content (the role of the head and the dependents), position (word order) and syntagmatic relations (subordination, coordination or mixed). The most frequent types of Bulgarian NP structures are presented. These types are based on the evidence from the BulTreeBank corpus. Bulgarian NPs are divided into five subtypes: head-only, head-complement, head-adjunct, coordination and mixed. The possessives are considered either in head-complement or in head-adjunct types depending on their grammatical role. A special attention is paid to the head-complement type. In our opinion this type holds for the relational nouns (mother, hand etc.), quantitative nouns (litre, glass, group) and deverbal nouns (coming, solving). In addition to that, the binding phenomenon within Bulgarian NPs is outlined. It seems to be marginal, but gives a good basis for a comparison with the verbal domain. Within the head-adjunct type the quantifiers and determiners are considered as adjuncts. The selective power of the separate adjuncts is commented. Coordinations are treated as non-headed phrases. The section on the mixed phrases shows the obligatory and preference rules for making the NP projections. A final conclusion is made that the phrasal node collects the necessary information from both sources – its head and its dependent(s).

The PDF document (in Bulgarian): Bulgarian Noun Phrases in HPSG.